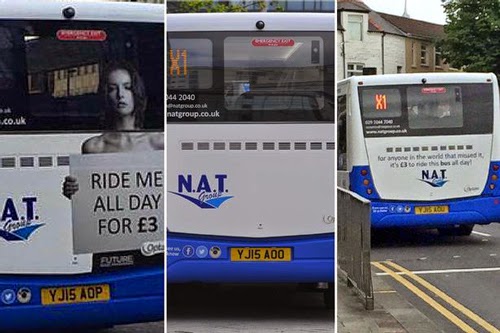 The adverts, which featured images of topless male and female models holding signs which read ‘ride me all day for £3’, were slammed by thousands and described as inappropriate, sexist and overly raunchy. NAT, however, argued that the ads were simply referring to the cheap day rider service offered by its buses.

The Advertising Standards Authority (ASA) received a total of 45 complaints about the campaign, which resulted in the immediate removal of the advertisements from the buses.

However, despite this negative press for NAT, the Cardiff-based company has now referenced the ill-fated campaign, poking fun at its own notoriety. The new bus rear ad text reads:

‘For anyone in the world that missed it, it’s £3 to ride this bus all day!’

Managing Director of NAT, Kevyn Jones, told Wales Online: “We have moved on have made light of it in the best way we can.”

He went on to describe how successful the new services offered by NAT, which are now in their third week of operation, stating that passenger numbers have been higher than expected.