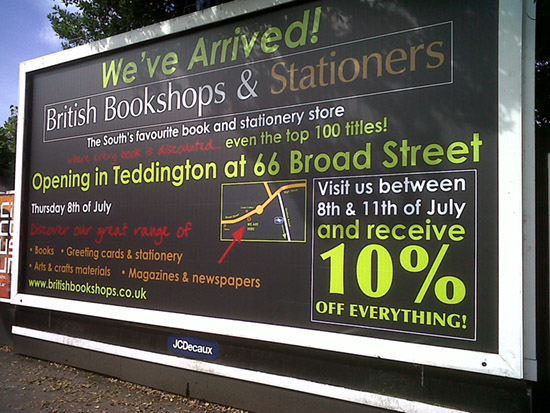 British Bookshops & Stationers has appointed Transport Media as their media planning and buying partner for an outdoor advertising campaign to tie in with the launch of their new stores.

The brief from the client was to devise a campaign that will drive foot traffic to their new store on Teddington’s main shopping street – a location that is nearby the local train station.

Based on this brief and their own independent research, Transport Media devised the ‘We’ve Arrived’ Campaign. Reading continues to be one of the most popular activities engaged in by passengers whilst travelling by train. With this in mind and given the close proximity of the new British Bookshops & Stationers store from Teddington train station, this form of advertising would provide the best opportunity to engage with a key potential consumer audience.

British Bookstores & Stationers are hoping to open more stores in the south of the country later on this year. They are so pleased with the results generated by the ‘We’ve Arrived’ billboard campaign planned and implemented by Transport Media, that they are considering rolling out similar campaigns for the launch of their other new stores.