To celebrate the 150th anniversary of the London Underground, the Richmond Theatre & Libraries Poetry Group are devoting their August meeting to the theme ‘Years on the Tube’. As part of this session, 73-year-old retired oil company employee Lionel Griffiths has been asked to create a piece of work for the group. An avid poet, Lionel has had work read in various venues and festivals, such as the Barbados Celtic Festival 1997, and has also had a poem chosen to represent Wales at Swansea International City of Literature 1995.

Lionel was kind enough to send his piece over to Transport Media, as he knows how much we love the London Underground…

VICTORIA AND SHADWELL
A TALE FOR THE LONDON UNDERGROUND ON ITS 150th. ANNIVERSARY

Victoria stood on the platform of Bethnal Green underground station studying her copy of the London Underground map when she saw her old friend, Shadwell coming towards her.

Vic. Hello Shadwell.
Sha. Hi Victoria, fancy seeing you, why are you studying the Underground map so intently?
Vic. I’m trying to memorize all the London Underground stations.
Sha. What! All 270 of them? Victoria, I always thought you a little strange.
Vic. Oh really? Anyway where are you off to?
Sha. I’m on my way to St. John’s Wood.
Vic. What on earth are you going there for?
Sha. I’m going to visit my sister.
Vic. Which one, you have Seven Sisters.
Sha. The youngest one Angel, she’s bought herself a very nice little Swiss Cottage there.
Vic. Oh! How posh, I bet that cost her a fortune. Anyway how are you getting there?
Sha. Well I thought maybe the Circle Line.
Vic. No you need to go on the Central Line and change at Bond Street for the Jubilee Line.
Sha. Thanks Victoria, you’re a mind of information.
Vic. Shadwell, where were you going in such a hurry yesterday? I just saw you dashing down the escalator at Liverpool Street.
Sha. I was late for an appointment at the pet shop in Shepherd’s Bush.
Vic. A pet shop, whatever for?
Sha. It’s a specialist importer of exotic birds, I wanted to purchase a Cockfosters.
Vic. What’s a Cockfosters?
Sha. It’s a rare breed of bird, I want one for my collection, it would be enough to make my friend Parsons Green with envy.
Vic. Did you get one?
Sha. By the time I arrived, he’d sold it. But he did say that I could get one in Ham, so I went there.
Vic. But Ham doesn’t have an Underground.
Sha. I know so I had to go on the District Line to Richmond and a bus from there unfortunately they didn’t stock them.
Vic. Never mind, Shadwell, you know the old saying. A bird in Ham is worth two in Shepherd’s Bush.
Sha. How very droll, Victoria, you should be a ticket inspector, they’re all a bunch of comedians.
Vic. Here’s another. How do you get the Queensway?
Sha. It’s on the Metropolitan Line.
Vic. I know that, I mean, how do you get the Queensway?
Sha. I don’t know.
Vic. Don’t make the Kings Cross, get it? Oh! Never mind.
Sha. Yes, I get it. Anyway, where are you going?
Vic. Covent Garden. Central Line change at Holborn for Piccadilly Line, but I must change at Waterloo & City Line for Bank to get some cash.
Sha. An audition for the opera, perhaps?
Vic. No I’m meeting my fiancée.
Sha. Leyton? I thought it was all over between you two.
Vic. It is, I have a new fiancée now, Brent, we’re going to the London Transport Museum it’s very Poplar as they say on the DLR..
Sha. He’s a transport buff too is he? you’re definitely Barking mad Victoria. Well don’t be late, you mustn’t make Brent Cross or he will leave you on the Northern Line.
Vic. Oh! Touché, Shadwell, well here’s my train, don’t forget the London Underground Motto. 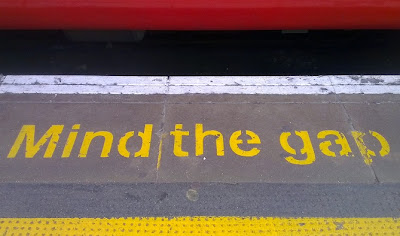