Transport Media have been selected to publicise Southwark Playhouse productions ‘Tanzi Libre’ and ‘Juana In A Million’, on show from the 15th May until the 22nd June and the 22nd May until the 15th June respectively.

Lift escalator panels will be present at Elephant and Castle London Underground station for a 4 week period from May 6th, raising awareness for the events thanks to Southwark Playhouse being situated just a five minute walk from the tube stop.

Split into quarters, the advert is 50% photographic image and 50% language. With pictures illustrating the nature of each play, the two rectangles of text are placed across a purple background for Tanzi Libre and red for Juana In A Million. The logo for Southwark Playhouse is clearly visible in white, with each production title made conspicuous through large, colourful typography. Contact details for Southwark Playhouse are presented in the form of telephone number and website, underscored by the theatre address. 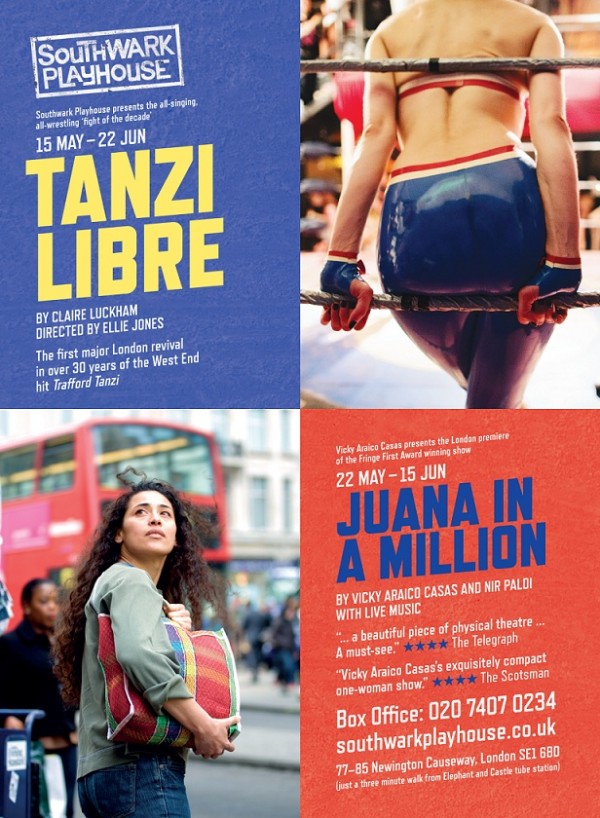 Each depicting aspects of Mexican culture, both Southwark Playhouse shows are on sale at the full price of £16, with £14 for concessions and £10 for previews. Each production already has an affiliation with the arts, as Juana In A Million stands as last year’s winner of Edinburgh Festival and Tanzi Libre traces its origins back to 1980s production ‘Trafford Tanzi’, which played in the West End and starred Toyah Wilcox. Founded in 1993, Southwark Playhouse prides itself on exhibiting emerging creatives within central London, also hosting a free Young Company programme.

Leading outdoor agency Transport Media has the necessary experience required to effectively fulfil the advertising objectives set by Southwark Playhouse, with a team of dedicated specialists offering top industry knowledge. The lift escalator panel format will expose the campaign to every single passenger at Elephant and Castle, both upon entry and exit of the station. Positioned at one of central London’s primary junctions, the London Underground stop experiences over 1.5million users per month, thus optimising relevant exposure for the campaign within 0.3miles of the theatre.