Following the success of their London campaign, The Langham, London has continued their use of branded taxis in a further promotional campaign at the opposite end of Britain. Organised by Transport Media, the 52-week plan is currently running in London will also be mirrored in the cities of Edinburgh and Manchester. Implementing taxi livery advertising, the branded fleets will establish a presence for the hotel in these key locations. This successive Scottish marketing strategy has been conceived in order to encourage more tourists from England’s neighbours, positioning the taxis in the capital of Edinburgh to guide its urban audience towards The Langham, London. 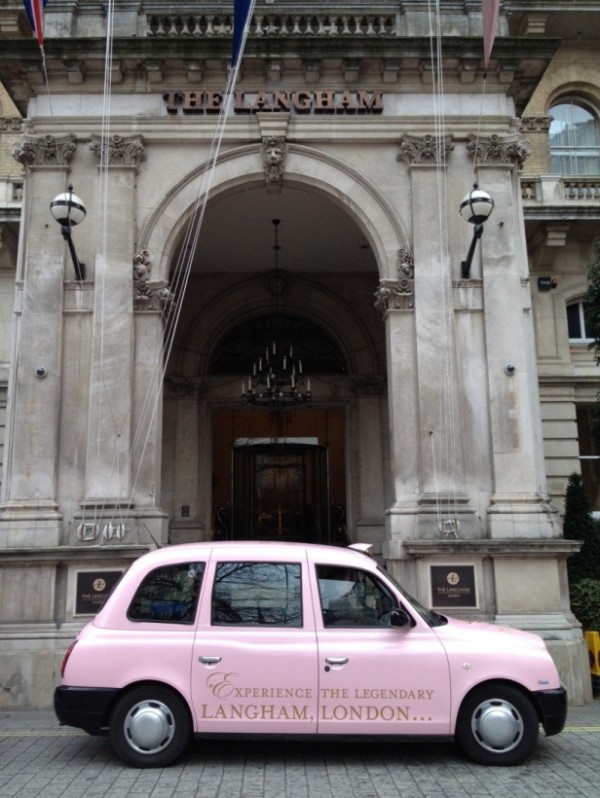 Langham Hotels’ director of communications Brian Gore said: “We have a really exciting story to tell and we want to share that with visitors. We want to extend an invitation to people living and working in Edinburgh, to families and couples looking for a weekend break. Hopefully people will see the taxis going about the city and it will create a lot more impact with them.”

Iconic cab vehicles have once again been doused in The Langham’s trademark shade of pastel pink, presenting the copy “Five Star Luxury at the Legendary Langham London” in golden lettering. In an internal extension of the brand experience, tip seat adverts have been included to complete the full promotional package. The Edinburgh campaign presents an interactive aspect as it directs locals towards social media engagement, offering them the chance to win a luxury weekend break at the London hotel by uploading photos of themselves alongside one of the distinctive taxis. Attracting an annual total of almost 4million staying visits, from both domestic and international tourists, Edinburgh is an ideal location for enticing a metropolitan audience seeking a city break.

Since its formation in 1865, The Langham, London has been providing luxury accommodation for the city’s most select guests. The five-star offerings cover everything from gourmet dining to an exclusive health club, with the on-site Artesian cocktail bar recently gaining award-winning status as Drinks International’s ‘World’s Best Bar’. With a distinguished Britishness, The Langham, London is also famously the origin of the very quaint afternoon tea concept. Gore also painted a positive picture for competition entrants, saying that: “We hope the reaction to the pink taxis is going to be really positive. The hotel really comes to life at the weekend – it’s full of vibrant people who want to experience London and we think that will really appeal to the people of Edinburgh.”