Regent Street will once again pave the way towards the luxury Café Royal hotel, as the 5-star accommodation recently re-opened its decadent doors to London’s elite. Following its closure in 2008, Café Royal made a welcome return in December 2012, and has appointed Transport Media to organise a city-central advertising campaign to re-establish its presence. From the 8th April, taxis in central London will be distributing branded receipts in order to place the hotel directly into the palms of affluent travellers. 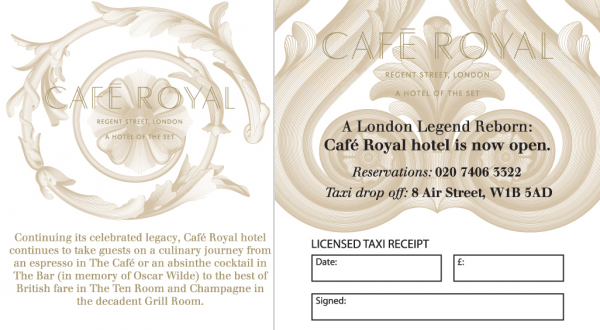 The receipt pads are populated with elegant Café Royal artwork, displaying a decorative background which evokes a sense of the hotel’s 19th century grandeur. The Café Royal logo lies on top, followed by the text ‘a hotel of The Set’, which informs knowledgeable recipients that this is part of an exclusive and definitive hotel collection. A contact telephone number and ‘taxi drop off’ address directs passengers towards Café Royal, including a paragraph on the hotel’s culinary temptations to entice taxi users.

Sandwiched between Mayfair’s boutique culture and Soho’s nocturnal ambience, Café Royal stands in a grade 1 listed building amidst London’s West End. Originally devised by French wine merchant Daniel Nicholas Thévenon in the 1860s, Café Royal was a renowned watering hole and social space for the likes of Oscar Wilde, Rudyard Kipling and Virginia Woolf, later catering for patrons in the league of Mick Jagger and Brigitte Bardot. Having closed in 2008, a thorough restoration from David Chipperfield Architects has transformed the original establishment into a contemporary Café Royal hotel, offering 159 guest rooms, the Akasha Holistic Wellbeing Centre and a variety of drinking and dining offerings.

As leaders of the outdoor advertising industry, Transport Media have the necessary expertise required to effectively plan and manage the Café Royal advertising brief. Advertising on receipt pads not only associates Café Royal with the iconic black cab, it also enables passengers to keep the image with them, extending the brand into the individual’s personal sphere. With over 185,000 cab journeys occurring on a daily basis and frequently transporting important and influential city dwellers, receipt pads are a diverse and durable method of positioning Café Royal amongst a relevant audience.