Coordinated by Transport Media, MediaDevil have launched an advertising campaign across the London Underground in promotion of their new Capacitouch soft-knit touch screen gloves. With a compatibility covering most current touch screens, the gloves are a valuable winter purchase as they allow consumers to use their technology devices outside, even in extremely cold weather. The campaign has been tactically timed, coinciding with the increase in technology purchases over Christmas and New Year, and the current winter climate which is blasting the UK. 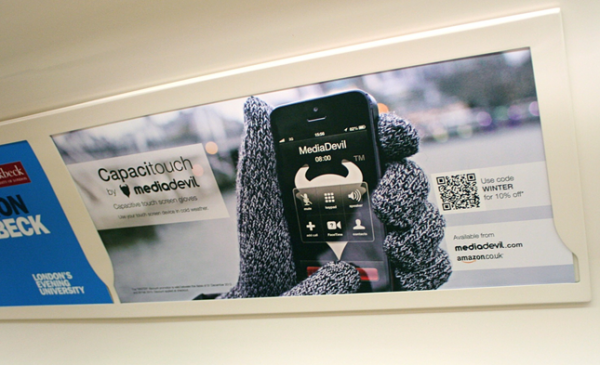 The adverts feature high-quality photographic images of the Capacitouch gloves working with a mobile phone touch screen. The graphic is surrounded by available stockist websites, a 10% off QR code, and both the Capacitouch and MediaDevil logos. The neutral colour of the advert allows the smartphone to stand out as the promotional focal point, attracting customers due to the fact that the majority of Tube passengers will now be operating similar devices.

MediaDevil have been contributors to the mobile accessory market since 2009, offering a range of ornamental but practical products such as screen guards and protective cases. Now operating in London, Milan and the US, the brand’s success has gained it the prominence of “best-selling and most positively reviewed screen protector brand on Amazon UK and Amazon Italy”, with founder Callum Bush being named as one of Growing Business’ 2012 Young Guns.

Transport Media’s industry experience allows MediaDevil to have access to a broad range of advertising options and combinations, giving them maximum effect and preventing wastage. Promotional placement on overhead tube car panels offers prolonged marketing exposure to potential buyers throughout their journey, offering a high dwell time as each Underground journey lasts an average of 13 minutes.