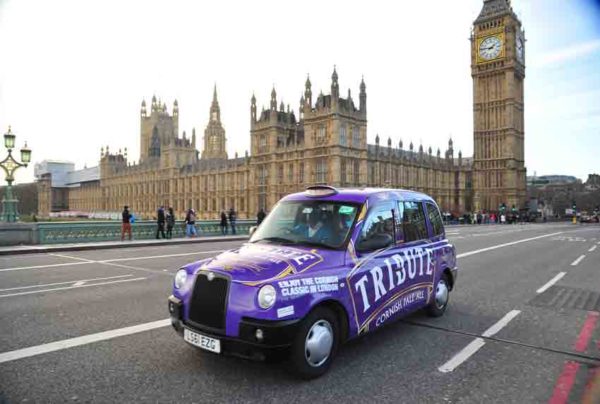 The campaign informs taxi users where they can pick up a pint of the traditional Cornwall favourite in the Capital, without the need to take a ‘five hour cab ride’ down to the South West. The eye-catching purple exterior adverts will stand out amongst the hustle and bustle of the city centre traffic, while the interior tip seat adverts feature a handy map, directing passengers to their nearest thirst-quenching pint of Tribute.

St Austell Brewery are a long-standing independent, family-run business, founded as far back as 1851 and proud brewers of many award winning beers. Tribute Cornish Pale Ale is a traditional South West favourite, as well as being one of the fastest growing premium cask ale brands throughout the rest of the UK. Its unique purple-coloured branding and bottles help set it apart from the competition, and St Austell beers are now available in over 350 pubs and bars within the M25.

CEO of Transport Media’s parent company Media Agency Group, Lee Dentith, said: “We are extremely proud to be working alongside St Austell Brewery to help them promote their traditional Tribute Cornish Pale Ale to an ever-growing audience in Central London. Taxi advertising is a great way to promote a brand and I have no doubt that the campaign will be a huge success, hopefully leading to us working together in the future.”

St Austell Brewery’s Marketing and Communications Director said: “London is a key market for our beers and it is very exciting to see Tribute being advertised on the iconic London taxis. This campaign will help introduce Tribute to more consumers in the capital while also giving practical advice on where in London you can enjoy a pint of this Cornish classic.”