The sun has gone down on another phenomenal V Festival weekend, which sees revellers from across the country travel to Staffordshire, and expert outdoor media planners Out of Home International have worked with the Staffordshire Safer Roads Partnership to ensure travellers to the V Festival are alert to the dangers of drink driving.

Festival Fever is in the air. With late stages finishing at 11pm, and the V-festival village open later still, The Staffordshire Safer Roads Partnership recognised that festival goers enjoying the atmosphere of the weekend may be tempted to drink and drive, posing a high risk on the busy roads into the county. Along with this risk, tired drivers may use the roads and not act with usual diligence, and ensure all of their passengers are belted up.

Staffordshire Safer Roads Partnership contacted Out of Home International with the brief of their hard hitting ‘Game Over’ campaign. Out Of Home International recommended a multimedia approach ensuring the target audience could not miss the poignant images of scenes after accidents, and arrests of drink drivers. The campaign delivers strong simple messages: ‘NO BELT, NO BRAINS’ and ‘OVER THE LIMIT, UNDER ARREST’. 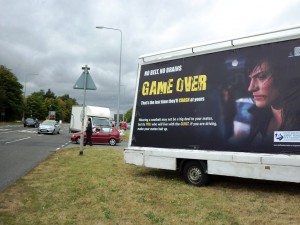 Out Of Home International’s transport division devised a campaign schedule using Bus and Advan advertisements, and large billboards to ensure the message hit home.  Staffordshire Safer Roads Partnership  is keen to get the lifesaving messages across stating on their website ‘Make your mates belt up… A car crash will be over in seconds but the feeling of regret and guilt will stay with you forever’.

According to the Department of Transport, drink driving amongst young adults is most likely to happen between the ages of 17-24 and the campaign is perfectly placed for this audience to absorb the communication and ensure they take responsibility for their actions over the summer season, and into the Christmas period.

Outdoor advertising has been used by the Staffordshire Safer Roads Partnership as it is one of the only media formats that can reach their target audience on a street level. Advans were strategically placed where queues of traffic to the V Festival would be waiting for some time, and therefore had the opportunity to take in the campaign and absorb the importance of the advice.

Chloe Shrubb, Marketing Officer at Staffordshire County Council said of the campaign “We chose mobile outdoor advertising for the Game Over campaign in order to really tailor the messages to our audience. V festival was the ideal weekend to launch the campaign as so many young people come to Staffordshire. The Safer Roads Partnership are by no means kill joys but by placing the ad van at the entrance to the site and by using bus and billboard advertising in ‘hot spot’ areas we were able to remind young people that they can have a fun time while also thinking about their responsibilities when driving.”

The high impact campaign will continue through advertising on buses and billboards throughout the festive season to ensure drivers wishing to drink alcohol make alternative travel arrangements, and designated drivers ensure their passengers are safe and using their seatbelts.

“We were very pleased to work with Staffordshire Safer Roads at Out of Home International, as it gives an important public service message the chance to reap the awards of large audiences engaging with the ‘Game Over’ campaign. From the client brief, Out of Home international recognised how important it was to reach the target audience, it was clear there were no other effective media opportunities in the area than Outdoor Advertising. We recommended the multimedia campaign, as this will reinforce the message as it is constant reminder to visitors and locals whilst travelling to the festival, and through the surrounding towns. We are confident that outdoor advertising will carry on successfully raising awareness of the ‘Game Over’ campaign.” John Kehoe, Managing Director of Out of Home International.