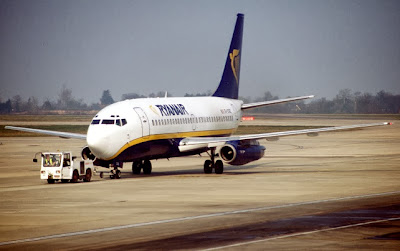 Low-cost airline Ryanair is looking to step up its game against rival Easyjet, unveiling pending plans to give its digital presence an overhaul. Easyjet currently manages a Twitter account from 8am to 8pm, 7 days a week, and its website is also optimised to run seamlessly across mobile, while Ryanair is lagging behind as it has only just joined Twitter and causes endless captcha frustrations on its web booking portal.

Rather than watching customers flock towards the free Easyjet app, Ryanair will scrap the existing €3 download fee and release its own equivalent from the 1st October. As part of this renovated customer service mission, Ryanair CEO Michael O’Leary says that they will “eliminate things that unnecessarily p*** people off” – namely the age-old pain of having to correctly distinguish fuzzy Recaptcha security codes.

Recaptcha will bid farewell on the 30th October, as part of Ryanair’s plan to make their website “easier for passengers to navigate, quicker for them to locate our all-inclusive price quotes, identify availability of our lower fare promotions and book Ryanair’s great fares for themselves and their families”. In order to maintain safety measures and ensure fair sales and accessibility, the company will continue to operate the Recaptcha for “high volume or multiple IP addresses”.

The airline will also begin to allocate less of its advertising budget to traditional media, as it makes the transition into digital marketing. O’Leary stated that the company’s key aim over the winter months will be “to significantly invest in, and improve, the Ryanair.com website, our mobile platform and our interaction with passengers using socialmedia“. Their Twitter account has gained over 6400 followers between signing up on the 17th September and launching on the 23rd, and promises free flights to its 10,000th follower.

Good news for #Ryanair passengers: we’re getting rid of Recaptcha, our app will be free & a new website is on the way http://t.co/av9ZqUTpEU
— Ryanair (@Ryanair) September 20, 2013