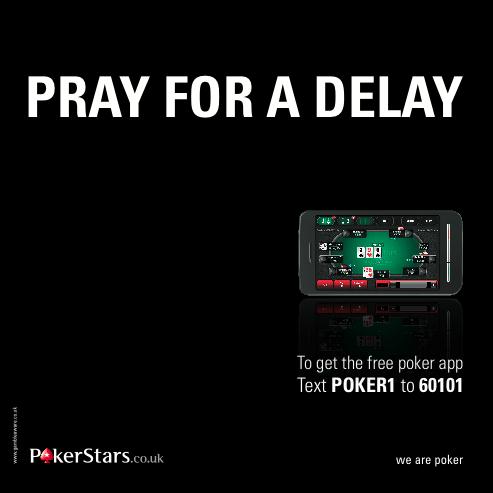 The campaign will feature on the Southern Railway network for four weeks reaching 5.3 million adults over the campaign period.

Transport Media recommended train advertising to effectively reach Pokerstars’ target audience.  The design of the train panel makes reference to the advertising environment with the ‘Pray for a delay’ message, prompting passengers to download the app for free to iPhone®, iPad® or Android™ devices, who are provided a welcome distraction during their journey.

“83% of frequent rail users access the internet at least once per day and they are twice as likely to own a smart phone. Train Advertising provides a positive captive environment, with the average commuter spending 22 minutes within the train carriage, allowing them to absorb and interact with the advertising message and download the Pokerstars App to their mobile phone or tablet.” Mark Dolan, Outdoor Consultant, Transport Media.

PokerStars is the best online poker room on the planet, with bigger tournaments, more games, and the richest player rewards program. The online service expect a positive result from the campaign as research shows that 85% of 25-34s believe their  mobile is more important than a PC/laptop, and 64% of people use their tablet device while travelling or commuting.

The PokerStars Mobile Poker App lets you play Texas Hold’em and Omaha on the go, with the same ground-breaking features and support that have already made PokerStars the choice of millions of players around the world. You’ll find real money and play money ring games, Sit & Go’s and tournaments to suit every skill level, with features such as chat, quick seating, multi-tabling, and tutorials optimized for handsets and tablets.