[TWEET_BOX]Transport Media, a division of Out of Home International, are excited to present the North West regional outdoor advertising campaign for the People’s Postcode Lottery. The charity lottery is marking its territory with the us 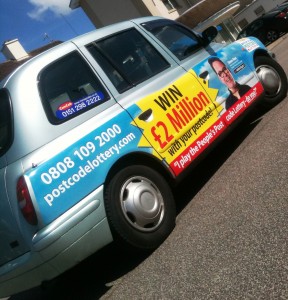 Right now hundreds of vibrant taxi adverts are dominating the city streets and urban areas across Manchester and Liverpool, transporting the message ‘win £2 Million with your postcode’ across the cities and into the minds of the consumer.

The lottery presents a fun way for thousands of communities to come together and win big with their postcodes. The Postcode Lottery said, “After the success of the People’s Postcode Lottery in the North East, which has seen players win more than £7.5 million, the charity lottery is expanding into the North West. Covering Liverpool and Manchester, the charity lottery is hoping to replicate this success and attract lots of new players. The lottery’s expansion into the North West will also be a great addition to the area’s charities, which stand to benefit from the People’s Postcode Trust, the charity lottery’s grant-giving programme funded entirely by the players of the lottery.”

The trust have raised more than £13.7 million for local charities across Britain, including those close to the hearts of residents in the North West such as the Liverpool Lighthouse Harmonize Healthy Cooking Project and Ashley Cricket Club free cricket coaching to primary schools in Manchester.

Taxi advertising has been chosen by the People’s Postcode Lottery as it is one of the only media formats that can reach their target audience on a street level. The campaign has a strong connection with the desired audience as the bright artwork includes images of local celebrities, radio presenters Mike Toolan of Key 103 and Simon Ross of Radio City 96.7. Locals are greeted by the taxi cabs, whilst out on their daily routine and are receptive to outdoor advertising. Taxi Advertising is a great way for a brand to be accepted in the local community, as it becomes recognisable and anchored in that area.

Philippa Quinn, Marketing Executive of the People’s Postcode Lottery commented on the campaign, “People’s Postcode Lottery chose taxis as we feel the high impact visibility and talk ability will raise awareness in both Liverpool and Manchester. We have a fantastic relationship with Transport Media and they are always willing to go the extra mile.  We appreciate their support and will continue to use them for any other launches in the future”.

The novelty of riding in branded taxis is high within cosmopolitan city centres, and urban areas alike. Locals will be rushing to travel in one of the taxis, and of course each ride is a new postcode the campaign can target.

Visit www.postcodelottery.com for more information on the charity lottery or to sign up and play.