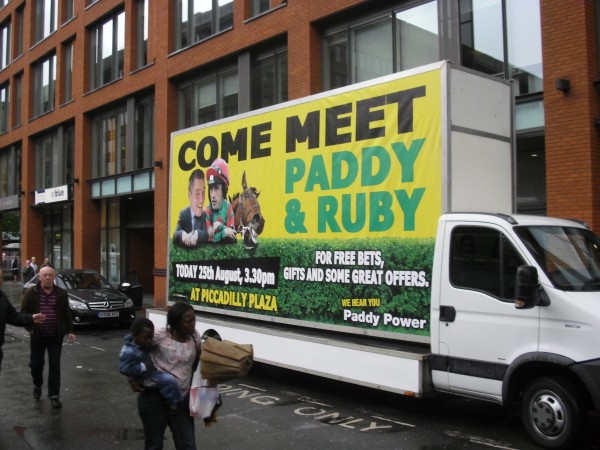 Just in case you haven’t heard, Paddy Power is Ireland’s biggest bookmaker. Their summer advertising campaigns have caused a stir with the British media, and there presence is ever growing in the UK.

Paddy Power’s most recent Outdoor Advertising, planned and bought by Transport Media, can be seen across the streets of Manchester promoting star appearances at the Piccadilly Plaza store.

Following a positive appearance on Channel 4’s Undercover Boss, Paddy Power executives rewarded the efforts of outstanding employees. Anne, the manager of Manchester’s City Centre store explained how she had transformed the shop from the location of regular anti-social behaviour to a booming success.

William Reeve, non-Executive Director of Paddy Power, was so impressed he handed over a marketing budget to re-launch the premises. Anne’s marketing team then contacted Transport Media looking for an Outdoor Advertising solution in Manchester to promote the ‘We Hear You’ campaign.

Transport Media recommended mobile Advan and Adbike advertising to transport the public invitation around the city of Manchester. The bright vehicles promoted the event with company mascot Paddy and jockey Ruby Walsh offering visitors the chance to meet the stars and receive free bets, gifts and some great offers.

Direct communications are a vital tool when trying to encourage behaviour change and Outdoor Advertising is a medium that can target people when simply engaged in their day to day activities. The message can be seen and shared by everyone in the public space and is important for creating a buzz, world of mouth and public opinion of the vital service.

Mobile vehicles offer a great solution by reaching busy pedestrianised precincts, straight to the heart of the public.