The Outdoor Media Centre has announced key insights into the competitive Out Of Home Advertising market and revenues generated in the UK between April – June 2011, which fell 1.2% to £208.9 million; after five consecutive quarters of growth.

This quarter, Outdoor has faced challenging circumstances, in the same way as other display media have, but revenues held up comparatively well”, said Mike Baker, CEO of the Outdoor Media Centre. “We were pleased to record only a small loss, and in fact more than half our 35 members enjoyed growth. With revenues for the first half of 2011 only minimally down, my hunch is that outdoor has outperformed the media market as a whole.” (www.outdoormediacentre.org.uk)

Emerging markets and digital formats are key growth factors in OOH. Outdoor Media Centre said: “Overall digital revenues were up 10% year on year to £29.8m for the quarter. Digital now makes up 14.3% of all UK outdoor revenue. Of this, transport (chiefly subway, rail and airport) made up 50%, roadside (typically large format LED billboards and spectaculars) 29%, and the retail and leisure sector (including malls, gyms etc) 21%.”

Transport Media’s client Graham London benefited from the use of a large scale digital billboard. The aim of the campaign was to promote Graham London as the Official Timekeeper of the 2011 RBS 6 Nations Championship. The iconic watch brand is united with London where George Graham founded the company; and felt Piccadilly Circus would be the perfect place to promote their brand.

Thanks to knowledge gained through our industry expertise; we recognised taxi advertising is a strong part of Out Of Home advertising and would be the perfect complement to the Digital billboard in Piccadilly. Transport Media constructed a carefully targeted campaign which meant the billboard and taxis were seen by affluent commuters and tourists with large disposable incomes. 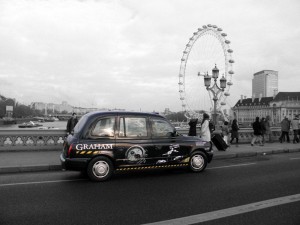 The campaign proved to be highly valuable in terms of engaging this audience in Piccadilly Circus, as they welcome advertising & actively sought engagement from it. Digital advertising is temporary, and stands out as commuters wish to see which brand is taking the Digital space next. Graham Watches dominated Central London with their billboard and taxi advertising campaign and therefore created a deeper, memorable  and emotional brand connection with those that were met with their advertising, prompting the audience to investigate into the brand which drove communication from potential customers.