As part of promoting Nepal Tourism Year 2011 (NTY-2011) in London, the Embassy of Nepal and the Nepal Tourism Board (NTB) together have started a publicity campaign by placing advertisements on city buses. The campaign will last till May 29, said the NTB. 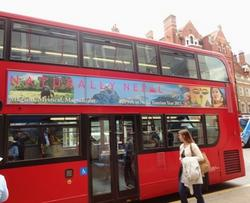 Adverts have been placed on 13 buses covering 21 major inter-city routes across London. The three-week promotional campaign aims to cover key central London locations at all times ensuring that the campaign is always in busy, high populated areas reaching a large number of shoppers and commuters, added the NTB.

“The promotional campaign has been targeted to create a wider impact about the NTY campaign in London through movable objects,” said NTB spokesperson Aditya Baral. London buses are known to be unique and quite a popular means of outdoor advertising. The city of London is one of the most sought after locations in the world attracting millions of Londoners and tourists on a weekly basis as it is an essential part of any brand advertising strategy, said the NTB.

As part of the NTY promotional campaign, the Nepal Embassy has published advertisements in Geographical, the official magazine of the Royal Geographical Society which has a readership of over 105,000.

“Apart from these advertisements and promotional campaigns, we and the embassy are also planning an advertisement campaign through taxis in London,” Baral added. The UK is the third largest source market for Nepal after India and the US.

In the first four months of the current year, Nepal welcomed 12,747 British visitors who came by air, up 23 percent compared to the same period last year. Last year, Nepal received 448,769 foreign air travellers among whom 32,108 were from the UK. About 3,431 British tourists visited Nepal overland last year.