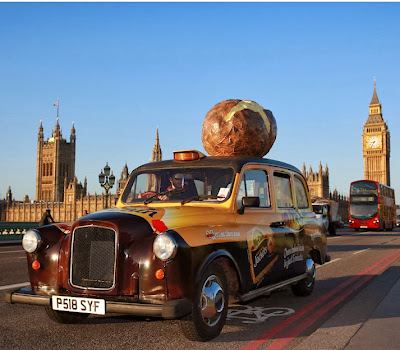 In the 5 minutes that it takes your microwave to heat a McCain Ready Baked Jackets potato, how far could you have driven in a taxi? Members of the public in London, Birmingham, Manchester, York, Leeds and Bristol will soon be able to find out, as McCain are extending their ongoing £35million Happy Days campaign to integrate a special taxi advertising initiative.

Head of brand at McCain Foods, Mark Hodge, said that the entire Happy Days strategy will make McCain “unmissable over the next 12 months”, continuing to say that “we have big plans to grow the brand and the category by changing the way we talk to the consumer”.

Following in the footsteps of McCain’s scented bus shelters used to launch the Ready Baked Jackets, cabs in the selected cities will be picking up passengers and allowing them 5 minutes of travel in a specially equipped ‘Jacket Taxi’, which is designed to release the enticing scent of freshly baked jackets from a 3D rooftop model potato and is also fitted with cooking facilites.

Hodge commented on the Jacket Taxi by saying: “We’re bringing a whole new meaning to the idea of driving sales. The Jacket Taxi campaign will deliver huge consumer awareness and genuine stand-out for McCain Ready Baked Jackets, transporting them from the freezer aisles quite literally into the noses, minds and mouths of hungry shoppers across the country.”