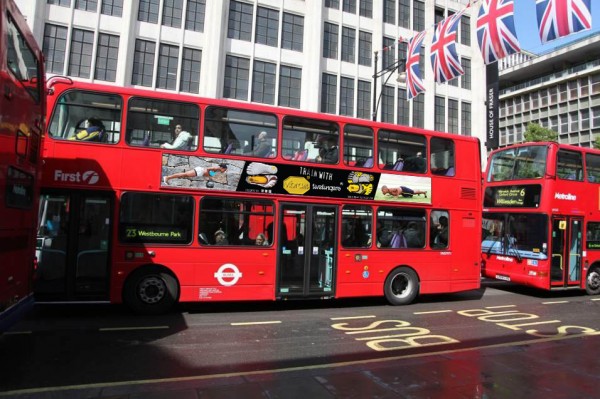 In anticipation of the 2012 London Olympic Games Italian company Vibram® are in the starting blocks, ready to launch their new Advertising campaign in the UK to promote Vibram Fivefingers®.

Transport Media were appointed by Primal Lifestyle, the official distributor of Vibram FiveFingers® footwear to the UK market, to handle the media planning and buying of the Outdoor Advertising.

The ‘Train With’ campaign will run timely with the influx of tourists and visitors in London for the 2012 Olympics. The campaign will target Central London showcasing the unique minimalist running and training shoes.

The branded buses will be on the road for four weeks, inspiring people around London to train with the latest and most extreme minimalist shoe style on the market, with the objective to increase awareness of the brand during the Olympic period; capitalising on the athletic focus and the increased tourism in the Capital.

Transport Media recommended bus superside advertising in Central London in order to effectively promote the unusual design of the training and running shoe to consumers out and about on the move.

Vibram FiveFingers® is the minimalist training and running shoe, taking athletes back to nature. Named due to the individual slots for each toe, the shoes are on the way to becoming a sports phenomenon of summer 2012.

The bus supersides can be seen by those on foot on a street level, and in a safe way whilst driving. Bus advertising is renowned for high coverage and recall with 91% of Londoners able to spontaneously recall a bus advertisement, with 73% claiming they prefer buses in The Capital featuring advertising.

Bus advertising is a cost effective format which transports an advertising message out to the public, and is massively effective for retail clients as it lets their audience know the product is out now.