Transport Media are responsible for facilitating a heavyweight advertising campaign for London Academy of Excellence, situated across bus rears and headliners based in the London districts of Hackney and Silvertown. Present during November and December, the adverts are intended to increase publicity in the popular admissions period which features several open days up until January. 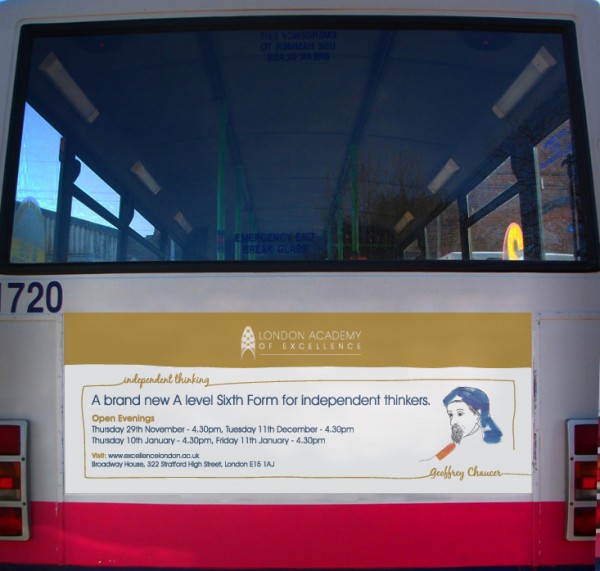 The A-Level Sixth Form is situated in the Stratford area of East London, carefully selecting promotional origins of Hackney and Silvertown to cover the north bank of the Thames. Offering 12 A-level subjects, London Academy of Excellence takes pride in fulfilling an independent and diverse educational structure, as it is the first state sixth form operating under the Free School Programme. Working autonomously to set its own goals, the school represents its brand with hand-drawn images of iconic independent thinkers.

The positioning of advertisements on buses located at Hackney and Silvertown depots allows the surrounding areas of Stratford to be touched, with routes navigating locations accessed by potential students. The graphic itself is topped by the London Academy of Excellence logo upon a golden header, and contains one of the school’s trademark sketches, selecting 14th Century poet, philosopher and astronomer Geoffrey Chaucer to front this particular campaign. London Academy of Excellence further extends its presence by incorporating the term ‘independent thinkers’ in a bold slogan, followed by essential open evening and contact information.

In order to promote the intellectual growth and unique approach of London Academy of Excellence, the college has appointed Transport Media as a result of its dedicated expertise. Providing the school with professional guidance, the outdoor advertising specialist ensures that target audiences are addressed, using one of London’s most iconic and high-frequency public platforms to generate publicity.