Here’s one for the inner sci-fi geek in you: Japanese airline All Nippon Airways (ANA) has recently unveiled a new Boeing 787 aircraft emblazoned with ‘Star Wars’ and painted to resemble the iconic movie’s most famous droid, R2-D2.

Capitalising on the renewed interest in the franchise, which has just released a teaser trailer for new installment The Force Awakens, ANA has decorated the jet’s fuselage and cockpit with blue panels and stripes to replicate the robot’s colour scheme, with other minor features – such as red circles from which the droid would fire lasers – sure to be spotted by eagle-eyed Star Wars fans. 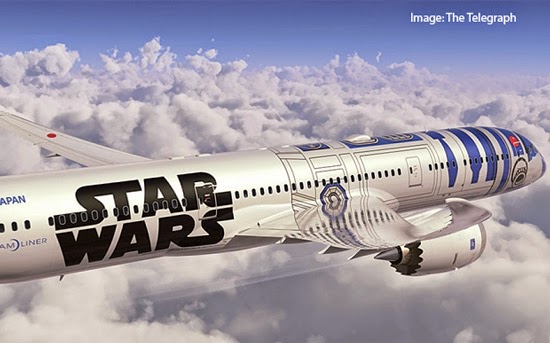 The new ANA aircraft will be embarking on international flights in the autumn, and is ideally-timed with the new movie set to be released in December of this year. The release of the Star Wars plane is part of the airline’s strategy to enhance its brand presence on a global scale, and marks the beginning of a five-year relationship with the franchise.

Vice president of marketing for Lucasfilm Ltd., Kayleen Waters, said of the new agreement: “We’re excited to be involved in this collaboration with ANA, one of the world’s leading 5-star airlines. We’re proud of the innovative R2-D2 design, and we look forward to witnessing the first-ever flight of a passenger aircraft featuring a Star Wars character. We’re confident that Star Wars fans around the world will absolutely love this design.”

We’re big fans of this new aircraft here at Transport Media – fingers crossed for a C-3PO-themed plane in the near future!