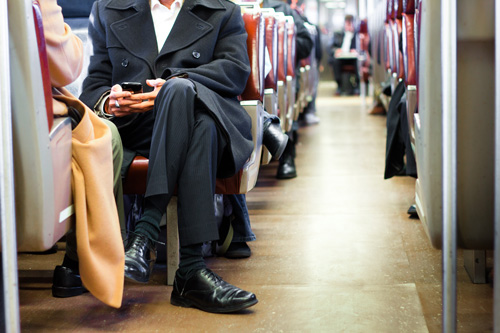 The everyday commute is something that the majority of us have to deal with each morning, with a large number of us spending far more time than we’d like on a busy train or tube carriage in order to get to and from work. As more and more of us own smartphones, laptops and tablets, technology has become the go-to distraction to get you through your Monday morning journey into the office.

New statistics from a UK on-train media company claim that rail users are now spending half of their journey time on a device, and for advertisers, this opens up a real window of opportunity. A quarter of those on a device during their journeys are actually using it to shop online, often prompted from on-train advertisements such as tube car panels.

A survey found that, despite spending a considerable time on their handheld devices, rail travellers are well aware of their surroundings with a massive 94% of them claiming to regularly notice on-train advertising. Just under half of this number then researched or looked up something they’d seen on an ad, a third spoke to someone about it and 24% purchased something they had seen advertised on-board.

By combining on-train ad messages with increased device usage and dwell-time, advertisers are able to effectively drive product consideration and purchase both immediately and in the longer term. Figures showed that 29% of respondents purchased a product or service they’d seen advertised during their journey later that day, while 28% did so immediately.

Through train ads brands and advertisers are able to connect with consumers at the rare point when they actually have the time to notice an ad, research, browse and make a purchase – all on the same journey. Put your ads where your customers want to see them today by launching an advertising campaign with Transport Media!