Are you one of the lucky mobile phone users whose contract ended just as the iPhone 5 was released? Or are you one of the other lucky ones who was able to just splash right out and get the Nokia Lumia 920? Either way, anyone who has one of these several new 4G enabled communication devices is about to have their technological promise fulfilled, as mobile network EE rolls out this innovative, lightning-speed internet connection.

Flagship UK cities London and Birmingham are the chosen destinations for a three-month taxi advertising campaign that will unleash the 4G service, with 50 ‘4GEE’ branded cabs allowing passengers to experience the technology free of charge. With other networks scheduled to compete with EE’s initial 4G exclusivity from June, the network is ensuring that it secures its association with the term as early as possible. The move comes just as Microsoft have implemented a similar unrestricted internet offering across selected Network Rail stations in promotion of Office 365. 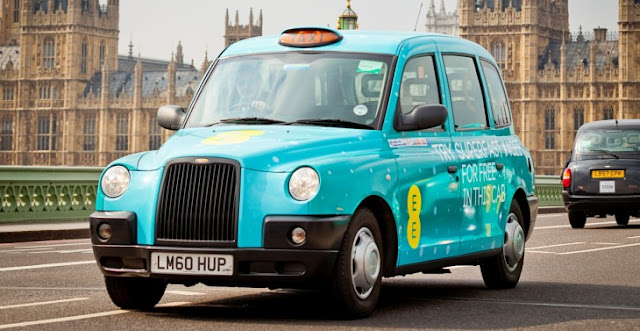 Drenched in a turquoise livery and sporting the words ‘try superfast #4GEE for free in this cab’, the taxis will use mobile WiFi routers to allow travellers within London and Birmingham to text their operator – whether EE or not – in exchange for an access code which will open the doorway to a data whirlwind.

The Saatchi & Saatchi creation was planned by media and outdoor agencies MEC and Kinetic, with EE brand director Spencer McHugh commenting that “We hope this trial will demonstrate the benefits of a superior online experience as users can browse, download, catch up on emails, tweet and check Facebook literally at the speed of light. We can’t make taxi journeys any faster but we can certainly speed up people’s smartphones!”