Transport Media is delighted to announce a new long-term advertising campaign in Norwich city centre, which began on Monday 6 April. By working with the Norwich Business Improvement District (BID), Transport Media has coordinated a full livery taxi ad campaign to feature on two of the city’s cabs for the next 12 months. The taxis feature fully wrapped exterior advertising, tip seat ads and branded receipt pads, all of which are promoting Norwich BID’s ‘Discover Norwich’ mobile app. 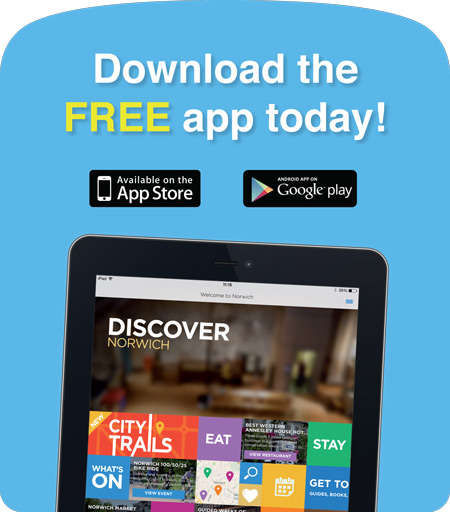 The bright blue taxis are set to make a huge impact on the city’s streets, as they stand out against the rest of the Norwich traffic. With branded receipt pads and tip seat advertising included as part of the full livery campaign, Norwich BID will be able to reach onboard passengers, as well as catch the eye of pedestrians and other road users. Full livery taxi advertising from Transport Media offers a long-term brand building campaign that makes a strong impact in busy areas.

Norwich Business Improvement District was established in 2012 and has proved itself as an inventive and progressive organisation run for local businesses, by local businesses. The ‘Discover Norwich’ mobile app is available for both Android and iOS devices, and is the number one app for everything based in Norwich city centre, with fantastic features available at the touch of a button – including interactive maps, detailed event listings and directories for restaurants, bars and hotels.

Managing Director of Transport Media’s parent company Media Agency Group, John Kehoe, said: “This full livery taxi ad campaign will take the great Discover Norwich app to the streets of the city, attracting the attention of both road users and pedestrians. It’s great that we have been able to secure the taxis have a long-term presence in Norwich by coordinating this 12 month campaign.”