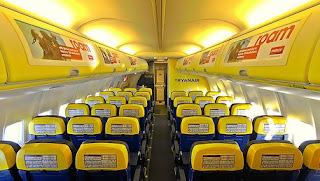 Ryanair is widely known as a champion of low-cost air travel, with their iconic yellow and blue branding and a systematic rotation of deals. Based in Dublin, their ever-growing portfolio of destinations now spreads through Europe and into Africa, with additional annually reoccurring long haul flights to New York.

Advertising on Ryanair is just as straightforward as all the other airlines – step on board and there is an instant view of aircraft passenger panels extending along the entire length of cabin baggage compartments, displaying everything from international tourism boards to Ryanair’s own promotional offers. They also allow brands the chance to target travellers before they enter the plane, with advertising opportunities available on boarding cards. 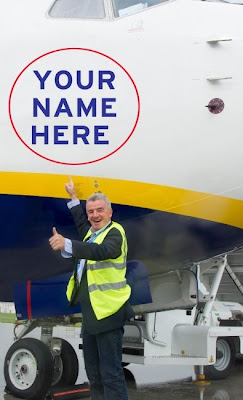 In a new outdoor advertising innovation, Ryanair have announced plans to sell space on their external livery, with expenses promised to be “a fraction of the price of a newspaper advert”. While Ryanair will retain their hold on the plane’s tail fin, the airline’s 303 aircraft will soon be offering 12-month advertising deals along the wings and the front and rear main body, allowing campaigns to take off across 180 destinations in the 29 countries served by the company.

Head of communications at Ryanair, Robin Kiely, said: “It’s not just low fares that we deliver as we’re now offering businesses the chance to reach millions of consumers through livery advertising on our fleet of 303 Boeing aircraft, ensuring their brand is featured on Europe’s largest – and cheapest – outdoor advertising medium.”