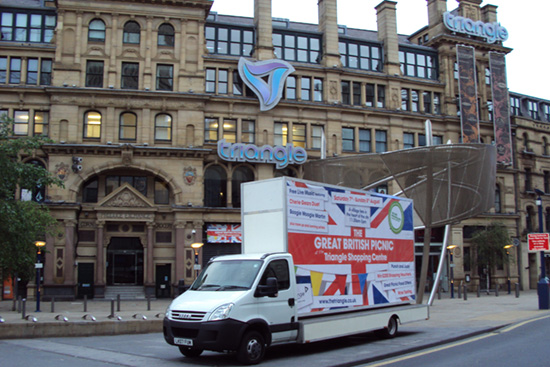 From the 6-8 August, Manchester will host its biggest ever picnic. The 3-day event has been organised by Cityco to raise money for the Macmillan Cancer Support Charity. Hundreds of people are expected to descend on the centre of Manchester with their families, friends and picnic baskets where they will be entertained in true, traditional British style. Open spaces will be transformed into designated picnic areas with benches, bunting and speciality market stalls selling perfect picnic food all being set up. Punch and Judy are even scheduled to make an appearance!

The Triangle Shopping Centre is one of many locations staging themed picnics for the event. A ‘Twitnic’ will take place at Spinningfields, Harvey Nichols will be running a Gourmet Picnic Garden, Barbriolli Restaurant and Bar will be hosting a barbeque near Bridgewater Hall and there will be a Teddy Bear’s picnic at Piccadilly Gardens featuring a special guest appearance by Build-A-Bear Worshop’s, Bearemy.

With so many events for people to choose from, The Triangle Shopping Centre is keen to heighten awareness of their 2-day Great British Indoor Picnic Event. They approached Transport Media with a brief to effectively plan and execute an outdoor advertising campaign that promotes their unique family-fun event.

As it is a City Centre event and given the steady levels of high footfall in Manchester City Centre, Transport Media has devised a City Centre focused mobile billboard campaign. They’ve created eye-catching artwork that communicates the key details of the event and that emphasises the ‘friendly to be enjoyed by all’ aspect by giving it a village fete feel. Transport Media was also keen to promote the fact that it was an indoor picnic – an event that people could plan to participate in regardless of the unpredictable ‘great British weather’. Other pieces of information included the entertainment comprising wine tasting and live music from new up-and-coming local acts, enticing picnic food offers and a competition to win £200 worth of shopping vouchers.

The billboard artwork featured a giant British flag; whilst this will appear an obvious choice, it is immediately recognisable and so something that is guaranteed to grab people’s attention – crucial to an effective outdoor advertising campaign. The event has captured much media interest and is expected to be a great success, providing much fun and raising lots of money for a very worthy cause.