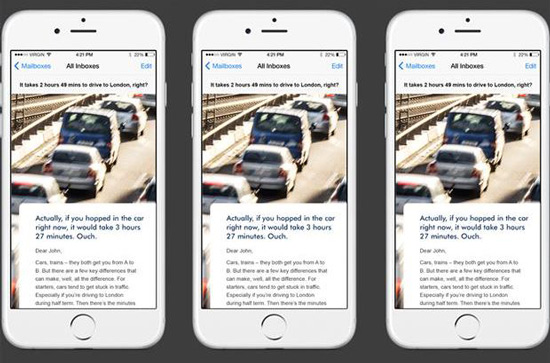 A new data-driven campaign to coincide with the school half-term holidays has been launched by East Midlands Trains, discouraging people from driving into London and tempting them to take the train instead.

‘Reasons to Take the Train’ provides potential train customers with real-time and geo-targeted information and data on how long it would take them to drive to St. Pancras from their nearest train station.

The email ad campaign utilises a live traffic feed to determine estimated journey lengths in current conditions, reading “If you hopped in the car right now, it would take [X amount of time]. Ouch.”

The email also features a buy button to direct readers to the East Midlands Train website, where they can purchase train tickets from directly, as well as details of appropriate train times.

“Our clever initiative encourages people to make tracks by encouraging them to travel by train,” said Head of Commercial at East Midlands Trains, Marc Turley.

“We want to encourage individuals and families to make the most of the autumn half-term rather than spending hours behind the wheel.”