Some of London’s busiest streets could once again be brought to a standstill, with United Cabbies Group (UGC) planning its biggest protest yet against Transport for London (TfL).

The taxi trade assocation recently caused a massive holdup on London’s famous Oxford Street as many of the city’s black cab drivers formed a blockade to show their discontent on a recent Greater London Authority (GLA) report which highlighted the recent struggles that drivers of Hackney carriages are facing. 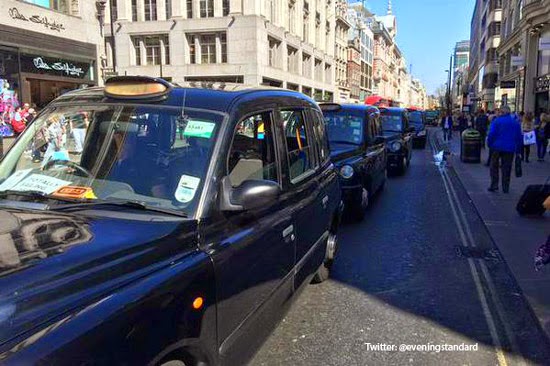 The UGC has just announced a second day of action to take place later this month, with as many as 2,500 taxis expected to blockade the head office of TfL in Victoria for an hour and a half. The cabbies will drive slowly between the HQ at Windsor House and Victoria Station on May 26 from 2pm, effectively shutting off the area to traffic. Chairman of UGC, Len Martin, told the London Evening Standard:

“We’re going to keep on ramping it up. We’ve got a bigger one planned already. It’s just going to escalate if they don’t act on this. It’s going to grow. I don’t think they realise each time it will momentum.”

UGC are dissatisifed with TfL’s failure to deal with a number of issues, such as a rise in the number of unlicensed cabs, illegal touting from minicabs apparent ‘inadequate’ background checks on some minicabs. TfL, however, have claimed that steps are already being taken to address these issues, and that the previous protest on Oxford Street ‘achieved nothing.’