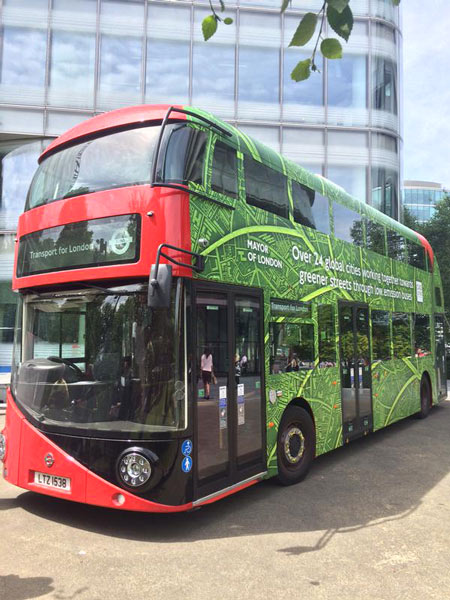 Mayor of London Boris Johnson has made no secret of his desires to improve pollution in the capital, with the world’s first Ultra Low Emission Zone on target to launch in 2020.

His latest move in this long-term project has been to unveil another world first: a double decker ‘e-bus’, which is solely reliant on electric power and will release fewer emissions than hybrids and vehicles running solely on gasoline.

Single decker e-buses are already in operation, but the addition of ten new double decker buses will see the iconic London double decker “become greener than ever,” according to Johnson.

Announcing the new project at the Clean Bus Summit at City Hall, he said:

“London is a world leader in clean buses but we can’t do it alone, and events like this Clean Bus Summit are key to making further progress.”

Sir Peter Hendy, the Commissioner of Transport for London, added:

“The introduction of new electric buses and further developments like induction charging at termini for hybrid bus batteries will significantly improve air quality and provide our passengers with quieter and smoother journeys later this year. We continue to embrace new technologies as they develop.”

The new fleet of double decker e-buses will be initially piloted on London’s route 16 from October of this year, running between Cricklewood and Victoria Station. It’s also expected that a total of 24 cities will also roll out 40,000 low emission buses by 2020.