Christian activists have lost a high court ruling over Boris Johnson’s ‘improper and politically-motivated’ ban on a controversial gay advert on a bus. 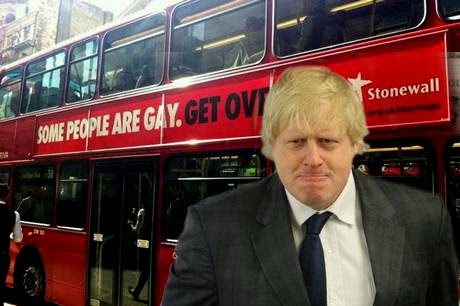 Boris was accused by Campaign group Core Issues Trust (CIT) of abusing his power and imposing the band for “the nakedly political purpose of currying favour with gay lobby groups” and boosting his re-election campaign in 2012.

The advert  that never was, read: “Not Gay! Ex-Gay, Post-Gay and Proud. Get over it!”

It would have featured on the sides of buses throughout the capital. It was intended as a response to posters promoted by lesbian and gay campaigners that were released on buses and read: “Some people are gay. Get over it!”

The CIT advert started protests and was condemned by the homosexual community as offensive and psychologically damaging. CIT said the advert was meant to highlight the fact that “people can change unwanted homosexual feelings”

CIT said the ruling confirmed that ‘the British establishment is no longer a guardian of freedom of speech nor of conscience’.

“Our advert simply mirrored Stonewall’s in attesting that some individuals have left homosexuality and no longer identify as ‘gay’, despite once having done so.”

Find out more about bus advertising.