Online bookmakers Betfair launched a transport advertising campaign with a difference on Friday, providing London commuters with a free lift in an attempt to battle the blues of what is notoriously known as the unluckiest day of the year: Friday the 13th.

The company sent a fleet of rally cars in the black and yellow branding of the betting firm along the London bus routes which statistically have the highest waiting times, with services such as the RV1 from Covent Garden amongst the worst offenders. Betfair then brought an unexpected slice of luck to commuters who otherwise would have been stood waiting in the rain by offering to ferry them around the Capital to and from their destinations throughout the day.

The taxis will feature in Betfair’s newest television advertisement – which will hopefully explain why each one was driven by a chauffeur dressed up as a horse – in the latest attention-grabbing publicity stunt from the online betting exchange. The campaign was also promoted on social media with the firm using #TapTapBoom to create real time Twitter content publicising the day’s events. 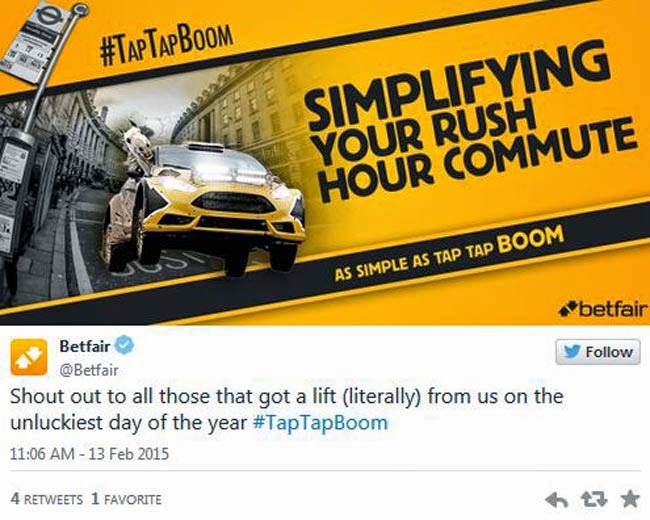 It’s not the first time that Betfair have caused a scene on the streets of London. The giant table-tennis-playing octopus that featured in their previous ad campaign famously brought traffic to a halt after the lorry transporting it broke down on Oxford Street.