British gin concocter Beefeater has once again appointed Transport Media as the purveyor of its latest taxi advertisements. Running for a complete twelve-month period, the campaign kicks off in time for Christmas and will be located in central London. Employed as a publicity device to transport VIP guests to the exclusive venue of the London Beefeater gin factory and special events, the branded fleet will represent indulgence whilst spreading the Beefeater name through the capital’s streets.

Covering a full taxi livery, the advert presents a collage of illustrated London scenery and photographs of debaucherous occupants. Featuring a tattoo parlour, playing cards, a chaise longue, suspenders and a motorbike, the Beefeater brand is promoted as being synonymous with clandestine and decadent behaviour. With the Beefeater logo acting as the advert’s centrepiece, public attention is instantly infused with the company’s imaginative image. 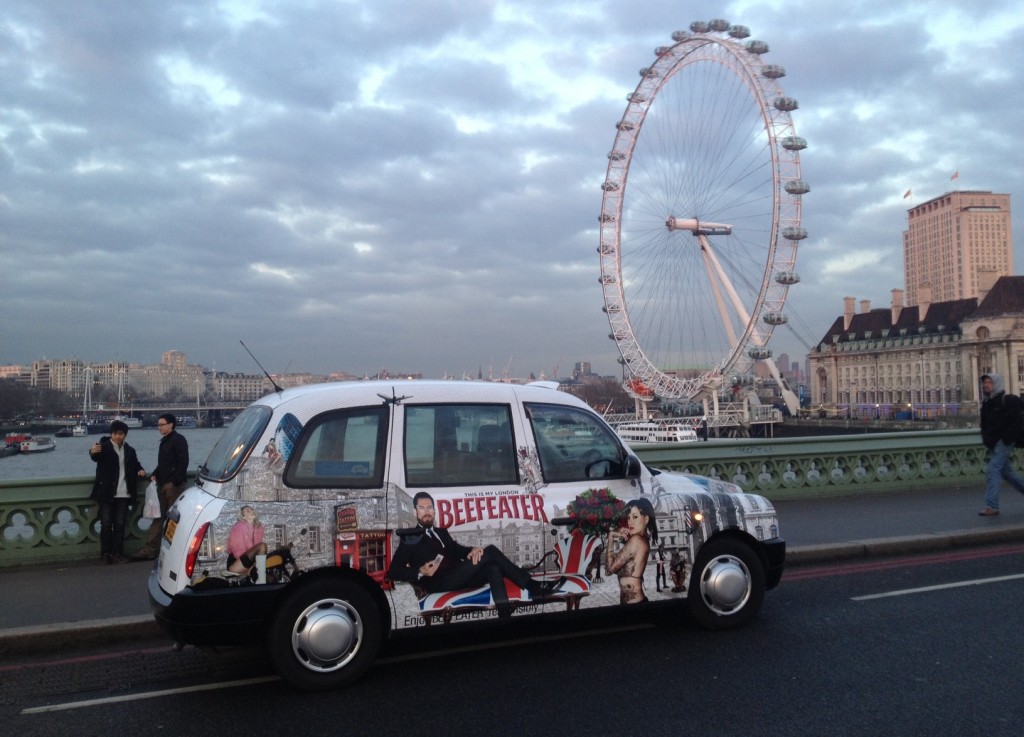 Tracing as far back as the 1820s, Beefeater’s 40% alcoholic clear spirit was conceived in London and retains its roots in its branding package.  With nine ingredients including almond and liquorice, Beefeater gin has been the recipient of several awards at the San Francisco World Spirits Competition, and prides itself in maintaining London as a production base despite its global export levels.

The freshly covered taxis will be transporting VIP guests around London, and also heading for their origin at the Beefeater distillery. The distillery’s Victorian architecture combines with 1960s extensions, making it an impressive location for exclusive events and sporadic public openings. With imagery that embodies the creative essence of London, the campaign is preceded by a #MyLondon Twitter competition in order to create a limited edition bottle for 2013 that features photographs from the #MyLondon participants.

Transport Media’s specialist knowledge will successfully work with Beefeater to produce an effective promotional method, strategically placing taxis in spaces where the public will have valuable visual access. The benefit of outdoor advertising lies in its ability to have a high-frequency impact on a vast audience, particularly in a significant and well-populated city like London.